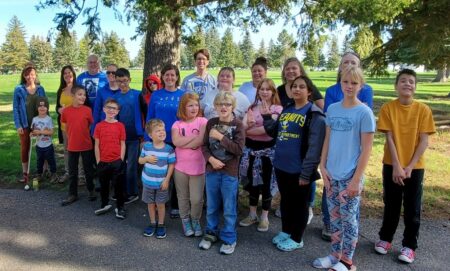 To foster the learning and growth of the whole-child with a hearing and/or vision loss, preparing them to become successful citizens.

To be Montana’s leading resource for the stakeholders of MSDB by providing supports & services that empower individuals to attain their highest potential.

All children are capable and confident and will receive an education through the whole-child education philosophy, which includes sensory specific access to communication and curriculum in safe learning & living environments. 1893 – The State Deaf and Dumb School was opened. The first school building was a leased two-story frame house with no electricity and no running water. The school opened on September 1st. In December, the school added the Blind Department. At the end of this school year, there were 4 deaf students, 4 blind students, and two ‘feeble-minded’ students.

1895 – The School moved to a store as the lease on the house expired after two years. The School remained at the store for three years.

1898 – Due to requirements of a land grant, the name of the school was changed to Montana Deaf and Dumb Asylum. The School moved to the permanent location in May. However, during the next winter, the heating system failed and the winter was severe. The dormitories were at 0˚ and it was -25˚ outside.

1901 – The School graduated the first ‘deaf and dumb’ pupil and the first blind pupil – the first ones in the state of Montana.

1901 – The publication of the Rocky Mountain Leader made its first appearance on November 1st. The Leader had three purposes 1 – teach the art of printing to the boys, 2 – increase literacy work done in the classrooms, and 3 – inform parents and guardians about the work of the school. The final edition was in May, 1972.

1902 – In December, the Board of Education endorsed a name change to ‘School for the Deaf and Blind.’ The name change become effective in 1903.

1904 – The School had so many students that a new wing had to be added to the building as well as a new boiler system.

1909 – Legislation was passed so that ‘feeble-minded’ people could remain at the school for the rest of their lives. This population grew quickly and the deaf people were concerned and wanted to separate the schools.

1922-1934 – The battle continued to separate the schools. On January 20, 1934, the legislature agreed to segregate the schools for the deaf and blind from the school for the ‘feeble-minded.’ The city of Great Falls donated 10 acres of land for the new school.

1937 – On October 11th, the new MSDB opened in Great Falls and it was formally dedicated on November 1st. The School had 82 pupils in the deaf department and 22 pupils in the blind department. Instruction for deaf students was oral. Sign language could be used after school and for chapel services.

1942 – The dog, Shep, was killed in an accident and Ed Shields, a train conductor, wrote and sold small books called Shep, the Dog That Was Forever Faithful. Proceeds from this book were given to the children at MSDB for recreation and for playground equipment.

1943 – Legislature approved the official name to be Montana State School for the Deaf and the Blind. They also placed the school under the direction of the State Board of Education and with a local executive board. The local board was discontinued in 1972.

1964 – The Rochester Method of instruction was adopted for deaf students.

1972 – Total Communication was adopted as the instructional method for deaf students.

1981 – Money from the Shep fund and from other donors were combined to create the MSDB Foundation Fund.

1983 – Cottages, dining facilities to connect the cottages, and a physical education facility were built and ready for occupancy. 1984 – The old dormitory building, affectionately known as the Butter Building, was razed. The granite marker was removed from the building and is on the current MSDB campus.

Historical information and pictures taken from: